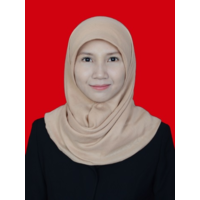 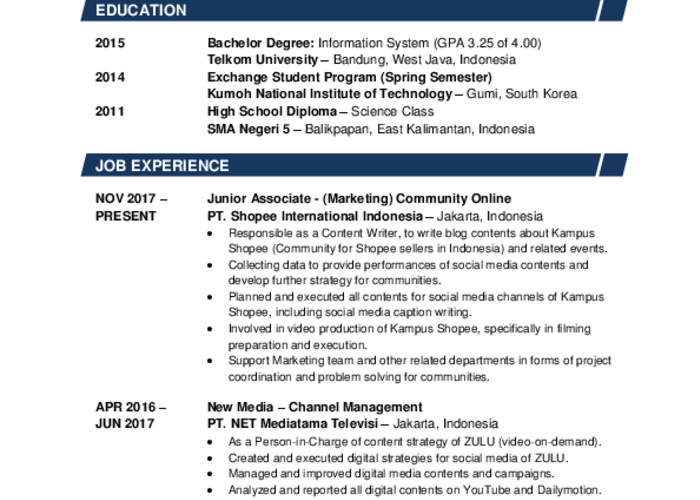 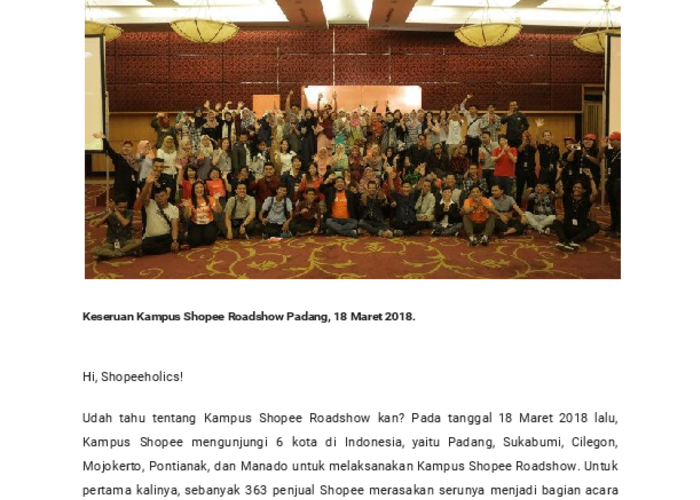 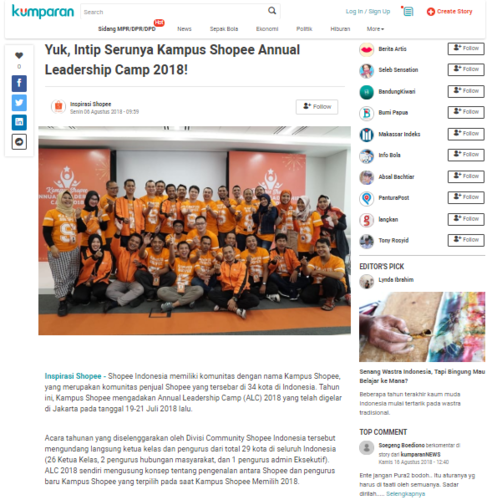 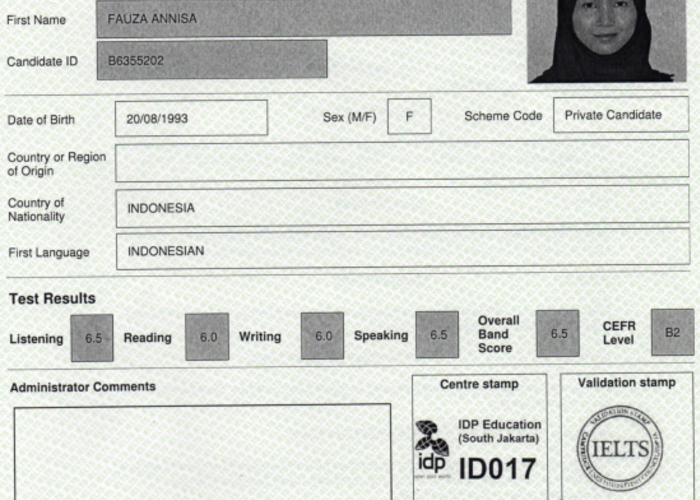 Experienced as Social Media Specialist and Content Writer with a demonstrated history of working in various types of industries. Skilled in Digital Content and Analytics, Digital Campaigns, Business Process, and Project Management. Fauza experts in writing, specifically about community, technology, and beauty. As a Bachelor of Information System from Telkom University, Fauza has a keen interest in technology, furthermore to Digital Media and Innovation.

• Responsible as a Content Writer, to write blog contents about Kampus Shopee (Community for Shopee sellers in Indonesia) and related events. • In charge as a content creator and executor for social media channels of Kampus Shopee, include social media caption writing. • Involves in video production of Kampus Shopee, specifically in filming preparation. • Collecting data to provide performances of social media contents and develop further strategy for communities. • Support Marketing team and other related departments in forms of project coordination and problem solving for communities.

As a team member of Channel Management, Fauza's focus is to plan, execute, and monitor all digital campaigns and strategies in effective, efficient way. There are several key assignments to this responsibility: - As a Person in Charge (PIC) of video-on-demand named ZULU, participating in all stages of digital strategies and innovation, in terms of contents and promotion. - Managing all digital contents of NET in Youtube and Dailymotion Channel, more precisely to analyze and reporting data from Analytics system provided by the platforms, including Google Analytics. - Doing in-depth exploration and analysis of social media analytics tools, such as Twitter Analytics, Facebook Analytics, Wayin, Sproutsocial, and numerous other examples.

Involved in one of project assisted by Ministry of Energy and Mineral Resources, Fauza has responsibility to do several assignments: - Participated in all stages of document production. - Translated system requirements and workflow from contextual and natural observations into functional requirements. - Reviewed and improved written documents related to system development. - Participated in analyzing user experiences of the system.

As an intern, Fauza had various experiences in information system field, such as: - Maintaining and controlling the system used by the company along with improving the business process of the system. - Documented process flows of systems used and analyzed requirements for functional improvement and enhancement. - Developed activity-based work flow of business process. - Designed the header for one of system used. - Monitored and maintained the performance of data server.

Took around 4 years, various experiences from academic to social pursued by Fauza. In the first year, participated as a member of Koperasi Mahasiswa and English Self-Access Program (ESAP) Helper, also done as a committee on an event called Industrial League. More to come, Fauza applied as Human Resource Staff at Digital Marketing of Telkom Engineering School and got accepted. Remembering that Fauza has passion in business process management, she worked as Laboratory Assistant at Business Analysis and Design Laboratory of Telkom University. Being pro-active and successfully adapt to various situation leads her to be selected as a representative from Information System major to be one of exchange student to Kumoh National Institute of Technology, South Korea. Fauza's final project is called "Design and Development of Investment Management Website Based on Crowdfunding in Small and Medium-Sized Enterprises by Using Iterative Incremental Method.".

As an exchange student to represent Information System major of Telkom University at Kumoh National Institute of Technology located in Gumi, South Korea. Computer & Software Engineering major were taken to be in accordance with the major in Telkom University.